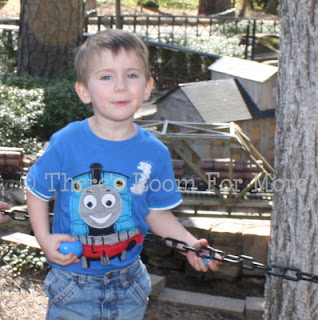 My big 4 year old enjoying the outdoor trains
What can I say about my Henry bug? He is the sweetest, most caring little man there is. He has a smile that lights up an entire room. I have never seen anyone smile so big that their back teeth show but Henry smiles just like that every time.﻿
﻿
﻿ 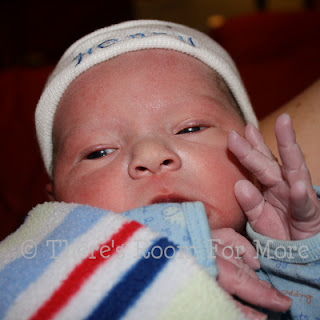 Birth
Henry has always been a laid back little boy. When he was born, I was worried that he didn't cry. He waited the longest time to start talking but you would never know it now. :-) 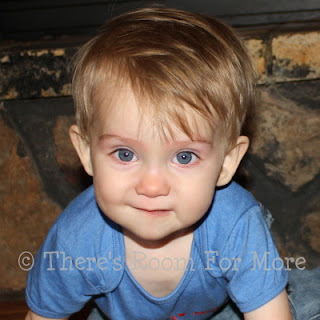 He is a Thomas the Train loving little boy. One of his first words was train. On his birthday he told me the following. "I'm glad I'm not a baby. Cause babies like Libby Kate don't even know about Thomas. I'm glad I'm big, cause I LOVE Thomas." He's great at remember what's important in life. 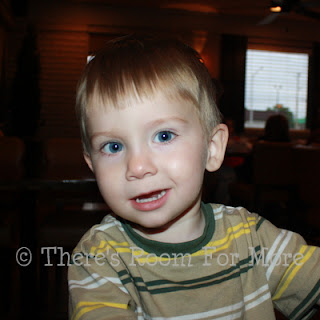 Henry loves his baby "Livvy Kate". He always wants to check on her and give her night lovins. He
also enjoys being the ring leader in some of the schemes that he and Mary Claire come up with. 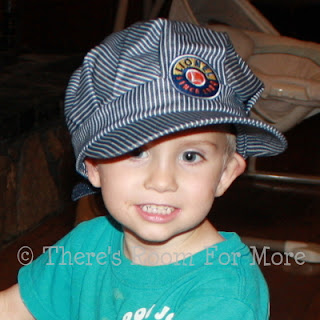 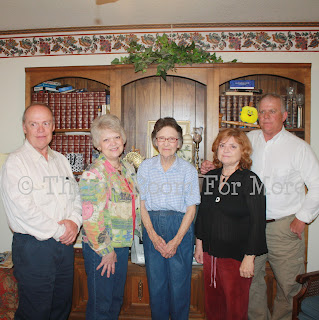 The past month has been a difficult one . Grandpa Lawrence had a stroke . He spent about a week in the hospital and passed away. 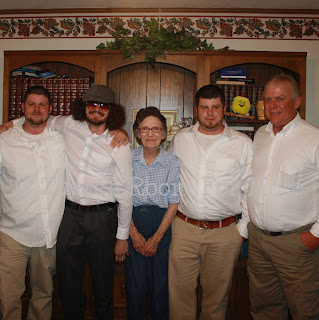 Grandpa lived a wonderful 97 years. We are incredibly thankful for the time we had with him, yet it seems so short. No matter when a person leaves this earth, you always long for one more day. I wasn't fortunate enough to ever meet either one of my Grandfathers. I met Grandpa over 17 years ago and from the first time I met him, he treated me like his own granddaughter. 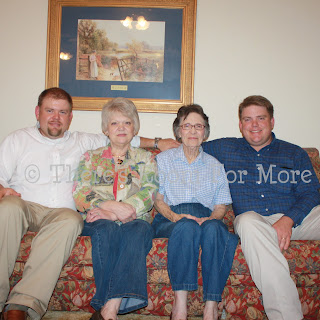 At his funeral Uncle Jackie used the word integrity to describe Grandpa and I honestly can't think of a better word. When I imagine the type of men I want my sons to become, Grandpa is the person I picture. 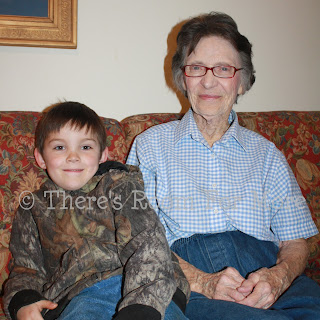 The younger Griffin and Mamaw

We were so blessed to be able to name two of our sons after him. He took great joy in his namesakes and would often say "I don't know why they named him Griffin/Walter" with a twinkle in his eye. 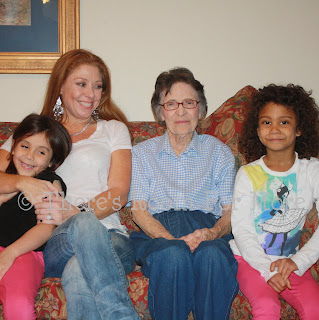 Cousin Rachel and her girls, Ava and Olivia with Mamaw
While we miss him daily and will until we meet again, we know that Grandpa is in a better place. He's waiting for us to join him and his presence will make that glad reunion day even sweeter.
﻿ 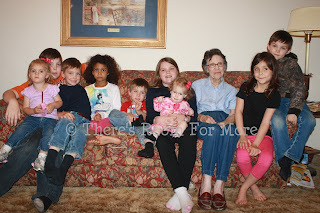 Mamaw and several of her great-grandchildren
Walter Griffin Lawrence died Thursday, May 2, 2013 in Memphis, Tn. He was 97 years of age. He was born December 16, 1915, to Fletcher and Annie Lawrence. He married Miss Nannie Sue Futrell on November 24, 1948.
He was proceeded in death by two brothers, Robert and Jim; and one sister, Lucille Bradley.
Mr. Lawrence was a veteran of World War II, having served in Southern Italy and North Africa in the 19th Regiment of Combat Engineers. He worked as a farmer and factory laborer most of his life. With a small amount of education, he was very smart and ambitious. He enjoyed working, gardening, carpentry, fixing and tinkering with things and spending time with his family and friends.
Griffin is survived by: His wife of nearly 65 years, Sue Lawrence; Two sons: Keith and Kevin; Two daughters: Charlotte and Vicki; 10 grandchildren and 13 great-grandchildren.

Liberty Kate you are ONE year old! 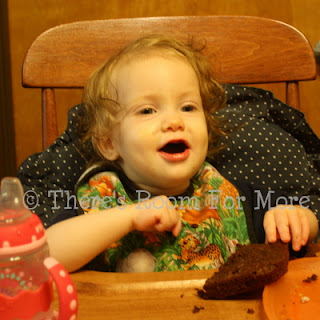 You love bread. Your favorite food is any type of bread. 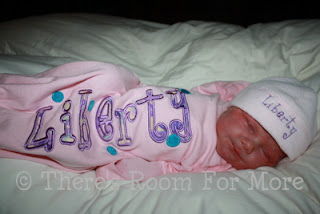 You are a crawling machine, you go everywhere!

You like to hang out in your saucer and watch everyone.

You love to suck your right thumb. 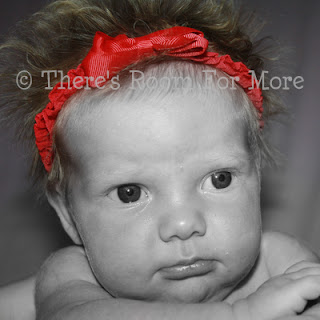 One Month
The day before your birthday you got your first tooth. It's the upper right middle.
You sleep 12 hours at night and take a 3 hour nap in the afternoon. You frequently take a morning nap for an hour or two as well.
You are cruising around all the furniture. 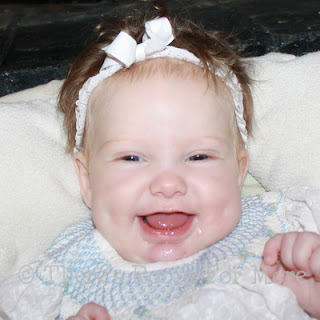 You take some time to get to sleep because you like stand in your crib instead of laying down.

You are down to nursing first thing in the morning and just before bed.

You seem to be a little bit hot natured as you wake up with a damp head often. 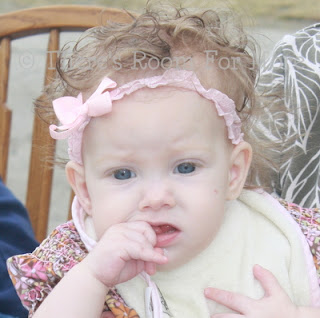 You still have curly hair though it doesn't curl quite as much as it has gotten longer.

Your hair has gotten long enough that it hangs past your eyes in the front.

Your hair still has a red tint to it and your eyebrows and lashes are definitely copper colored. 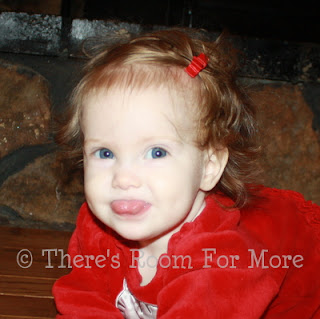 The first word most people use to describe you is sweet. You are such a sweet baby.

You like to cuddle with anyone (expect Mary Claire - you two just giggle).

You rarely cry  and always have a smile for everyone you meet even if you like to play shy.

We are incredibly blessed to have you in our lives!

Happy Birthday to our Family!

Happy Birthday to our Family! 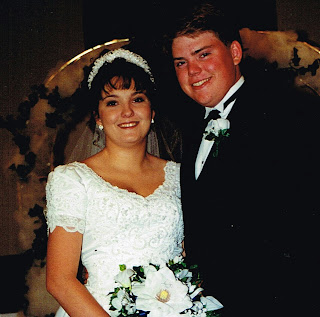 Our little family started 15 years ago today when Kent and I said our vows. 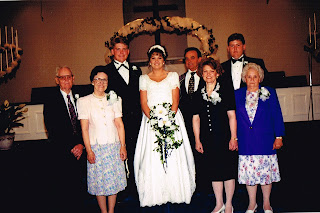 We were only 18 but we were determined to be together and make it work. 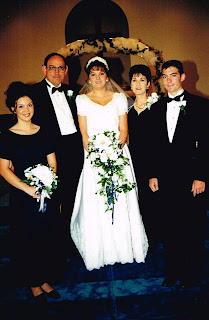 There were lots of people who doubted us and were happy to say 15 years later we're still married ... and to each other. 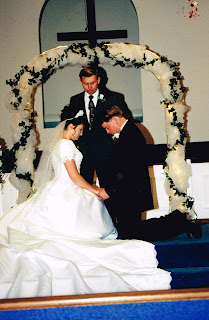 A  lot of things have changed but our commitment has not. 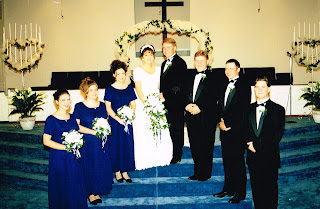 Happy Anniversary Kent! I'm just as glad to be your Bride now as I was then!
at 9:07 AM No comments: