When you're a CELEBRITY


Yes, it's a little early for Black Friday. 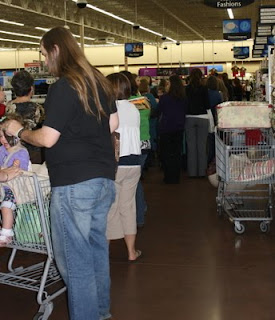 A few weeks ago I mentioned to Kent that a lady whose blog I read had written a book. She was coming to Little Rock and did he think I could go see her. I really expected the conversation to end there. He agreed and I called Robin. She thought meeting THE Pioneer Woman sounded like fun.
I arrived at 10 'til 6 and this is what I found. I knew that PW had a huge Internet following but this is Arkansas. Doesn't most of the country think that we're just now getting Internet here?
I NEVER EVER dreamed there would be so many people. 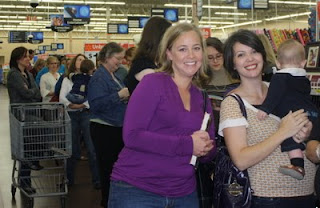 The background looks familiar doesn't it? Been to that bookstore before have ya?
Yes, the classiness of Arkansas showed through as we hosted a New York Times Best-Selling Author at WalMart! 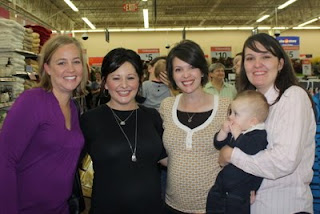 I met up with not only Robin but some friends of hers as well. Angie and Jess helped us pass the time. We talked about everything under the sun. Verses we'd like to have put on the walls (Jess has Psalm 128:3 in her kitchen and you all know my fondness for Psalm 127: 3-5. I would also love to put 2 Corinthians 2:9 somewhere.), Angie's son that makes my 7 year old sound like Amazon Boy, Robin's lack of showing, man child sized newborns, how to solve the problems of world hunger and war and I'm pretty sure we drafted a final version of the healthcare bill (it simply says LEAVE US ALONE!). See we had plenty of time for all of this because we were in line for OVER 3 HOURS! 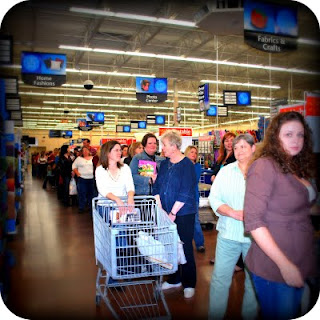 We also had the opportunity to chat with these great ladies in front of us. One of them gave birth to a toddler as well! They thought Robin looked familiar. I mentioned that she had a blog. LOL I think 99% of the people there have a blog (that's how Pioneer Woman gained popularity). Robin said she was MckMama . I think they bought it for a second until they realized there was no way MckMama would make the journey with Stellan having a procedure the same day. 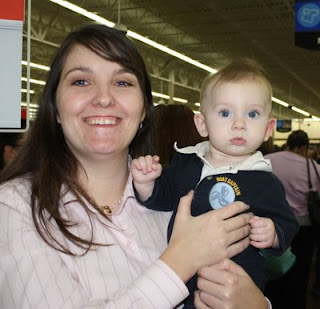 I do have to say that Henry was a real trooper. Though I think he's counting down the days until he can stay at home with the boys.
Somewhere around this point word got out that Marlboro Man was there. I don't think I have every seen so many women trying to get a peek. It really is a wonder that they didn't call housekeeping to clean up the drool on aisle 3. I think he was almost as much of a draw as Ree. While I'm not in the crowd that's awestruck with MM himself, I did fall for my own cowboy so I see the attraction. :) 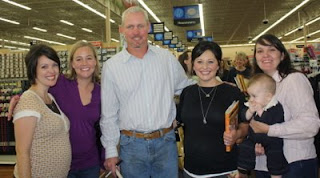 Those ladies in front of us also became our photographers. Poor things, they didn't realize they had to work for the privilege to stand with us.

MM signed our books. They're good folk like that. 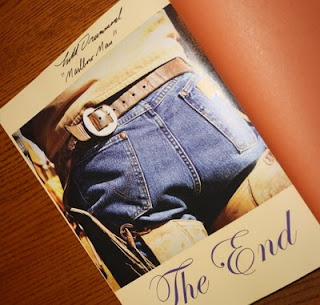 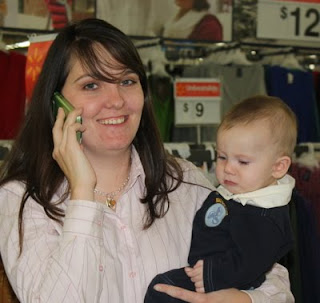 Because it was now bedtime, I had to talk to all the tired little people at home while holding a very tired little man. 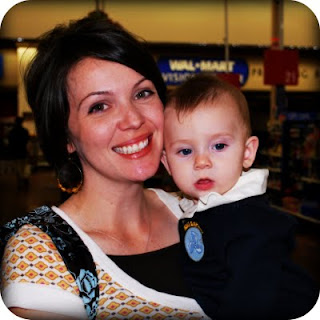 I'm not sure who was more tired, Robin or Henry. 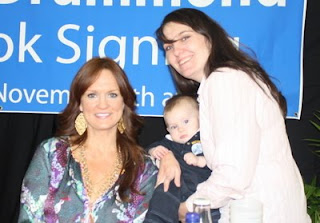 And the moment we've all been waiting for . . . . . I got to meet Ree. She thought Henry was adorable (of course) and said she loved the name. She said she named a pet Henry early in her marriage and then regretted wasting such a great name on an animal. 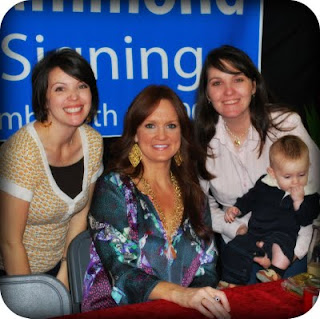 Robin and I with the Pioneer Woman. I spent 4 hours driving and 3 hours in line for this 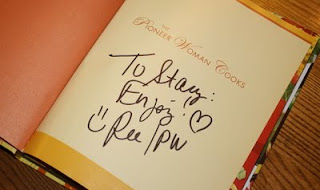 While I am glad I went, I will probably never go to something like this again. It was neat to meet the author of a book and I always enjoy getting together with other ladies for some grown-up conversation. But the time away from home for the few seconds of meet and greet wasn't quite an even trade.
For the sake of truth in journalism (you remember when journalist actually told the truth, right? ), you can check out Robin's version of the event here.
at 6:01 AM