The advantage of a snake in the house

Because we had a snake on the loose, I took the kids to the park. The park is a really nice place to go. It's only a couple of years old and has been maintained well. 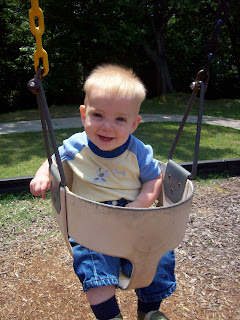 Ben loved the swing! He really liked it when sissy gave him a push. 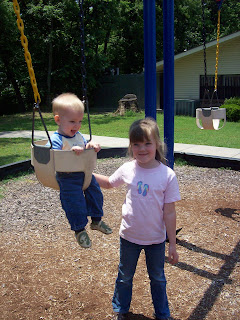 Griffin wanted to join in the fun. 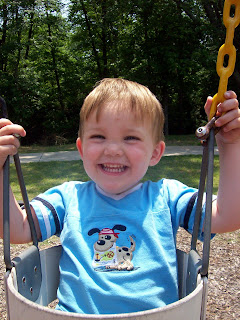 Madisyn and Ty had a great time on the see-saw. 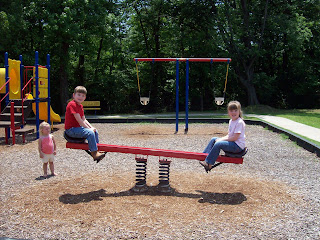 Of course, Ty and Griffin were drawn to the little backhoe/excavator. Ty maneuvered it with no problem. 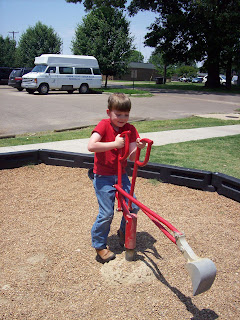 Poor Griff was just a little short and light to be able to handle it. The weight of the handles and bucket pulled him off the seat several times. His feet were nowhere near touching the ground. 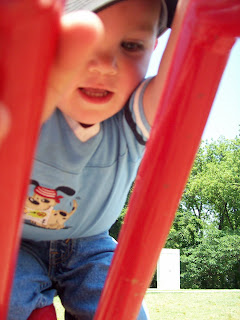 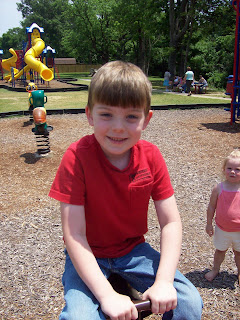 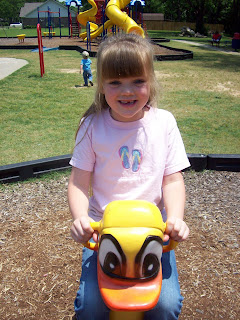 Just in case proof was needed that the boys are indeed little monkeys. 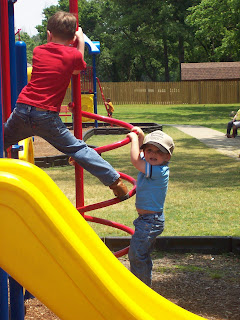 The best part of going to the park is the BIG slide. 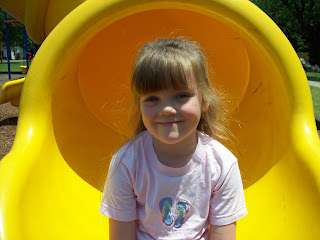 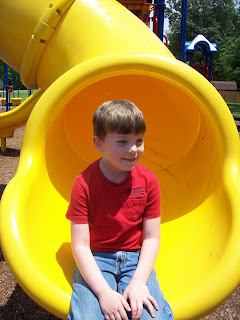 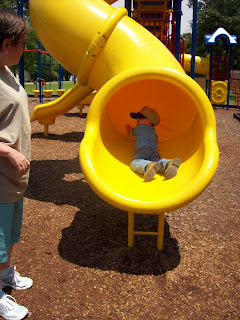 We could only stay about 30 minutes because it was soooo hot. Ben was bright red and his hair was dripping. Griffin was even wetter. 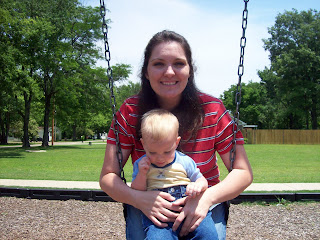 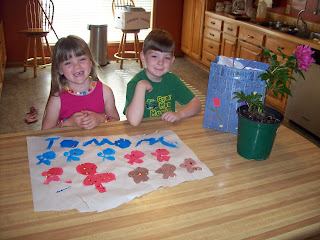 Madisyn and Ty put a lot of effort into Mother's Day this year. All the advertisements worked on them and I think they drove Kent crazy for two weeks wanting to purchase me something. I got a wonderful homemade sign and several handmade cards. I also recieved a lovely Peony, an external hard drive to store our pictures on and a bag of chocolate. Griffin discovered the chocolate and helped himself. LOL
at 8:11 PM No comments:

Robin and I decided to start a little business. We are going to call it Spinning Sisters. We plan to make all kinds of baby items and hope to participate in a couple of craft fairs this fall.

I made a few burp cloths for dad to give as a gift to a teacher who just welcomed a new granddaughter. The Grandmother is a business teacher. 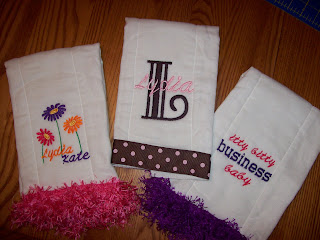 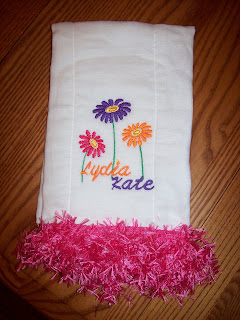 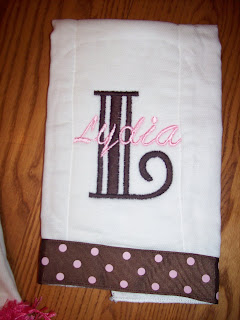 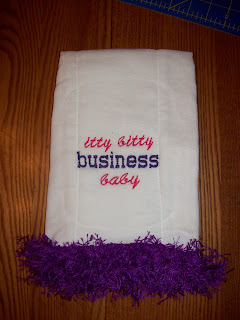 Snake in the House!

I didn't realized how long it had been since I posted a new entry. Life is busy with t-ball, homeschool convention and used book sales. I guess I was starting to think nothing "exciting" ever happens around here so the Lord sent me some excitement!

Early this morning, Madisyn was feeding the chickens. She came running in the house and said she saw a snake by the water faucet. She told me she could only see the tail so I went to check it out. I really expected to see a little baby snake or a worm. What I saw was two HUGE snakes. They were laying beside each other just a few feet from the back door.The larger one is/was close to 4 feet long and I don't think I could hold it (not that I ever would!!!) and my fingers touch my thumb. The smaller one was around 3 feet long and much skinnier. I HATE HATE HATE snakes. I fully understand that God created them and that they serve a purpose. They don't serve a purpose near my door.

I debated what to do and finally got a hold of Kent. He suggested I try the pitchfork and attempt to stab them both so that they couldn't go anywhere and then I could take a shovel and behead them. I left the kids at the door watching the snakes (that had not moved in over ten minutes even with our Rat Terrier pawing their tails) while I went to get tools.

I stood behind them and examined the situation a little closer. In a split second the smaller one darted into the house right by the kids!Madisyn and Ty ran screaming into the house and Griffin ran into the yard. I grabbed Griffin (the larger one coiled up but remained in the same spot) and ran into the house with him. We went by the snake and I saw it slither towards the hall (away from where the other kids went). We have a door that seperates the main part of the house from the back hall, laundry, garage area. I tied that door shut and looked up snakes on-line.

The second is venomous.In all the excitement I realized that the back door was still open. When I shut it, the larger snake was no longer there. It could be in the house as well. The kids and I left. I took them to Sonic and we went to the park. We then visited Kent's grandparents. After being away from home for over 4 hours, I had nothing left for us to do that wouldn't cost money. LOL

So I came back.I left the kids in the van and brought the dog in to examine the situation. A bag of trash is sitting the hall waiting to go out so I moved it with the hoe. Then I worked around to that small closet and I opened the door. I saw the snake's head and it retreated farther into the closet. I shut the door and put a towel and a rug at the bottom.I briefly checked the laundry room and the small bathroom and I don't see evidence of the larger one. I'm praying that it is in the backyard.

I really don't think it's the cottonmouth because it wasn't aggressive and never opened it's mouth but I'm not taking any chances!


Once the beast is tamed (read DEAD!) I plan to take some pictures and figure out exactly what it is.

My hero aka my daddy came over and took care of the issue tonight. It smelled terrible! We don't think the other snake got in the house because we couldn't hear or smell anything once this one was dead. This is an experience I hope to NEVER have again!
at 3:32 PM 2 comments:

Ty had his first game Tuesday. It was also picture day. Doesn't he look handsome? Sorry girls, he's all mine for at least the next 15 or so years. 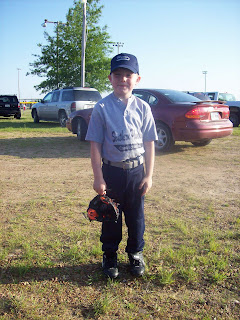 I made an uh-oh and we missed Madisyn's first game. Somehow I got it stuck in my head that Ty's game was Monday and Madisyn's was Tuesday. It wasn't until I couldn't find any of Ty's team that I realized my mistake. Madisyn missed her first game and it's all my fault. I really think I felt worse that she did. Ty was relieved. LOL He isn't very "in" to this whole t-ball thing. His relief changed quickly when he realized he had to get ready again the next day and that game wasn't cancelled. 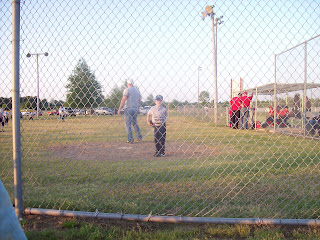 At the game, Ty got to play hind catcher. He did fairly well considering he could care less if he's there or not. It got too dark to get any good action shots but we'll try again another game ;) .
at 5:06 PM No comments:

(sorry this has taken so long. I had grand plans and I have realized just how UNorganized my pictures are.) 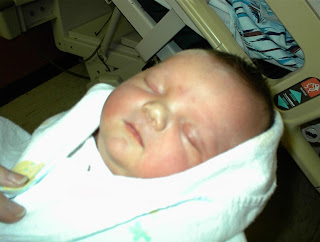 Madisyn Grace joined us. It seems as though she has always been part of our lives. I can't imagine what we did as a young married couple with no children. (Of course, now one child seems like a cinch ;) .) Kent and I were 21 when she was born. We were discussing the other day some of the things we did because older people told us we would "pass" her off. We couldn't imagine doing such a thing after we wanted a baby and waited 9 months for her. She was very wanted (as were all our babies). We were a bit extreme in our protectiveness. 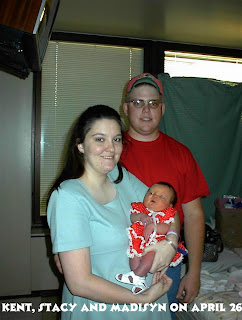 I was so thrilled for her to finally arrive. She was/is perfect in every way.

Her 1st birthday (with her name on the Sonic sign - I think this is the only time we have gotten a picture.) Just a few shorts weeks before her first birthday we found out that Ty would be joining us in the fall. 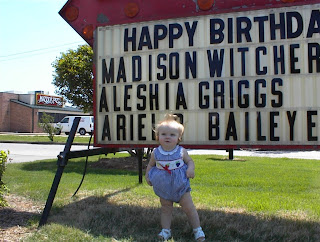 Madisyn has always been a talker - even at age 2. The saved name for this picture is Madisyn talking to Daddy. I'm sure she was really talking to him. I can't imagine putting Griffin on the phone now at almost three and expecting anyone to understand a conversation. Madisyn got the gift of gab. 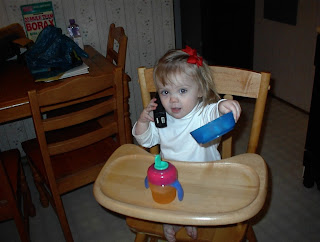 When she was three we starting going to the zoo. The 3rd birthday was the year of the pig cake. She really did want a pig for a cake. 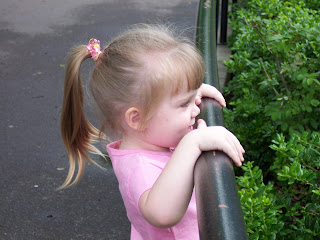 Her 4th birthday. I think this is the only party we had that wasn't at home. In my defense, I was very pregnant with Griffin and we were desperately trying to move. 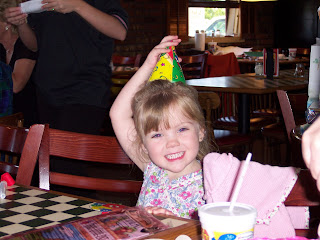 Number 5 . . . This is the only cake I didn't make. Papaw bought a party package at the Lion's club auction so we used it for Madisyn's birthday. 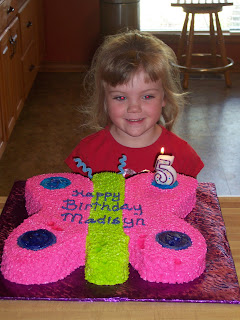 6th birthday and another trip to the zoo. This birthday I was very pregnant with Ben. Notice a trend LOL. 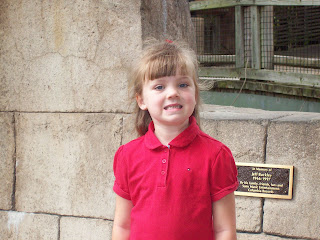 and she's seven. (Where's the bawling eyes out emotion?) Wow! What a year this has been. We're homeschooling for the 2nd year and she can read - I mean really read. She excels in math. Madisyn is such a big help with her brothers and mothers them whether they like it or not. She has learned how to operate the washer and dryer (oh so helpful) and even make the bed (including putting new sheets on!). Just a few days before her birthday she told her Daddy that she wanted three things for her birthday. #1 a baby sister (how sweet is that?!?!), #2 a pony (we brought papaw's horse over) and #3 a picture of the whole family for her dresser - we're working on that one. No I want a new doll, or I need more clothes. Just very unselfish (other that the horse) items. I have days that I want to pull my hair out but I'm so glad God made me her Mommy. I'm a very blessed woman. 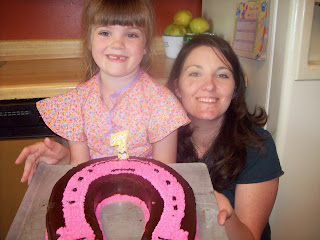