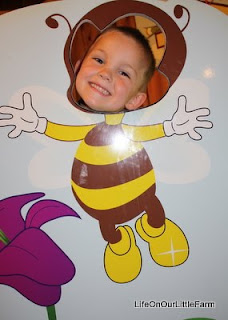 In early July, I felt the need for a zoo trip. We had a cooler day {certainly cooler than what we've had lately} and I wasn't feeling too nauseous so I asked for volunteers. Ty and Ben wanted to go to work with Daddy so I took Madisyn, Griffin and Henry to the zoo. 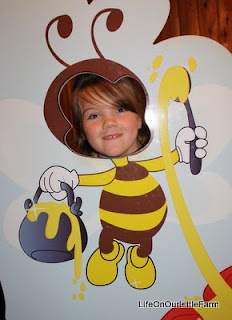 We've never visited the Birds and Bees exhibit before and since we were a smaller group than usual it seemed like a good time to check it out. 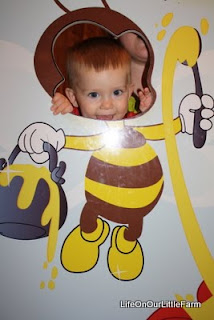 The first part of the exhibit was in an air conditioned building {YEA!!!!} and had all kinds of information on bees. There is an observation station where you can see in the bee hive and watch the bees fly in and out through a tube. They visit a lovely little flower garden outside a picture window and come back in with their pollen. They also had adorable cut-outs and my little hams enjoyed having their picture taken. In fact, Griffin often asks me to take his picture. Such a difference from his older brother! 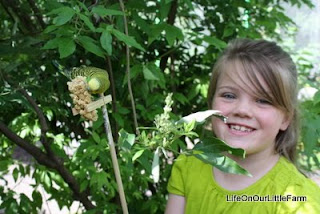 Once you've checked out the bees you continue through the building to a screened type structure with tons of butterflies and birds. You can purchase bird food on a stick and the birds will come out the trees to each your treat. We tried to get a picture of a bird near Henry but they weren't interested in getting quite that low. 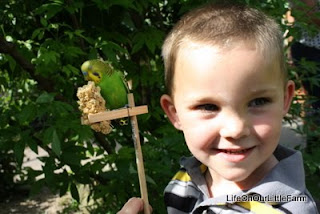 The birds were also a little leery of Griffin. Can you blame them? A very excited, barley 5 year old boy who jumped around like some of those bees found their way into his clothes! It took awhile but he finally "caught" one. 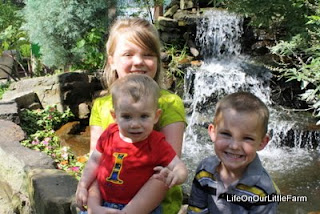 There is also a really neat water feature complete with koi pond. Henry wanted in the water! but he settled for sitting with Sissy. 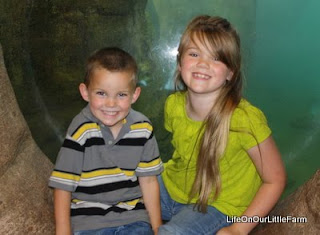 We continued up the hill and visited the new Teton Trek exhibit but found it was too late for the grizzlies to be out to play. We thought the polar bears might be taking a dip in the pool but all we found was empty display areas in Northwest passage as well. A lack of animals didn't stop my photo hounds from wanting their picture made though! 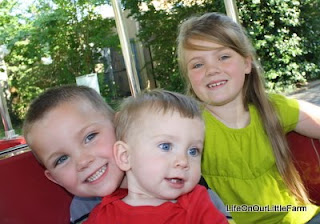 The highlight of the visit was getting to ride the tram. After walking all the way to Teton Trek, I was feeling weak. Since Henry had just turned one the operator let him ride for free and we took a little trip around the entire zoo. Griffin and Madisyn thought it was great! 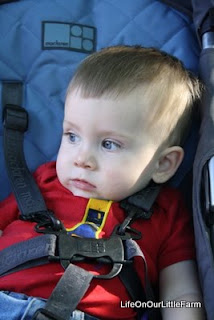 After an ice cream stop in the air conditioned cafe {notice a trend!}, we headed to the playground. Henry and I watched from a shady area while Madisyn and Griffin had the place to themselves. 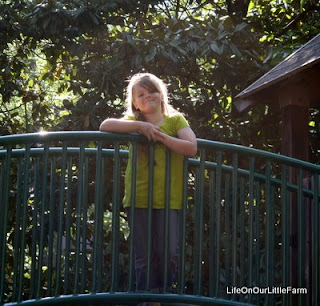 While I wouldn't have visited if we didn't have a membership, I found going to the zoo an hour or so before closing to be great. The crowd was really thin. It did seem that several of the animals had "gone to bed" but we still had plenty to do. 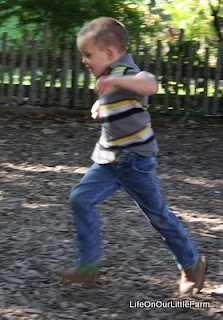 I also found it very strange to be there with only three children. I kept fighting off a panicky feeling that I had left someone behind!
at 8:50 PM